Posted on September 29, 2015 by thesweetlifesugarfree

While it may not quite be October, it’s close.

October is for pumpkins, the leaves start to change, and it begins to cool off down here in south Texas. It’s also Breast Cancer awareness month.

Today I thought I would begin start the pink month a little early and share the cliffs notes version of my my diagnosis story.

The reason I changed the way I eat (and even look at food) was because in September 2013 I was diagnosed with Stage 4 breast cancer. At the time, I was 31, mom to a 1 year old, and healthy (so I thought.) My numbers were always in the good to optimal range despite my lack of working out and watching what I ate. I didn’t really think too much about my health in general. I didn’t even have a general practitioner.

My daughter was about 18 months old when I visited my OB. We were trying to have #2, and for some reason or another, my plan wasn’t playing out like I wanted. After the normal inspection, she gave me the green light and told me it may just take longer this go round. Then I told her about the lump in my left breast. “Nothing” she told me, likely cystic and something a woman my age should not worry about.

That was that, and on my way I went.

A few months go by, and this lump, which my doctor brushed off as “no big deal” was now something I could feel as it pressed into my arm when I laid down.

I decided to go back. There was something inside that told me I needed to. The last thing I wanted to hear was that I was over reacting, but I really knew something had to be going on inside.

I went back and saw the nurse practitioner. She agreed that I was not crazy and actually pointed out a second lump. She said that likely they were nothing but that she would send me for imaging to be sure.

The following week I went into imaging. My no big deal ultrasound changed from a chat session into something else as the technician started getting quieter and quieter. I remember her leaving the room and scrambling to get my doctor on the phone to order a mammogram.

All the jokes about the mammograms are justified. That was an experience I will never forget. I’ll leave it at that. 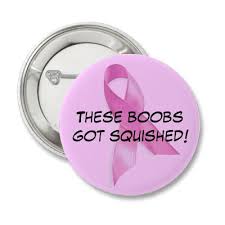 I then waited to speak to the radiologist. She was in a darkened room with a wall of screens. Those screens were the images I had just taken and to her they were “Very Concerning.”

If there was ever an “I told you so,” moment I didn’t want to have it was now.

In the following weeks more imaging, biopsies, blood draws, and tests. None of the results came back the way we wanted at the time. It was definitely cancer, and it had spread. Significantly.

Not your typical cancer patient

The moral of the story and why I share it, is because, likely I would not be here had I not followed my gut. I am not the “typical cancer patient”, and I am frequently reminded of that in waiting and treatment rooms. But I knew something was wrong well before I was diagnosed. I had to be the squeaky wheel to get something I knew I needed.

When it comes to your health, YOU have to take care of it. Not only before and after your doctor’s appointment but also during. SPEAK UP, if you have questions, ask them if you are not satisfied, do something about it. Be that patient that errs on the side of annoying.

I have learned so much about healthcare, doctors, insurance, and time. While there are no blanket statements for any of these things, what I can say is that taking care of yourself is your responsibility and hopefully a priority. No one can do it better than you.